As we are growing up, curiosity intoxicates us with the urge to know more. Tons of questions baffle the mind as we try to figure out a pattern, a system and a reason to our world. With time, this curiosity dies down a bit and we get absorbed and swept away in the found; the known; the obvious; the universal. But what if we decided not to accept these standards? Would we notice a quiet disruption in our conditioned surroundings? Through my work, I offer the potential seeker a quiet revolution in the form of a quirky moment of freedom and play that blurs the notion of time and place for as long as the viewer is enraptured. The moment the viewer switches off his or her attention, the circuit is released and he or she returns back to his or her familiar environment.

It was amazing how awe-struck I was by the fireflies, by its transient beauty and the hours spent looking for them, wanting to capture forever their magic in my mind. The exploration developed into an expression of how we try to contain thoughts and memories that exist in our minds, but escape us the more we want to catch them.

Beautiful and easy to understand

Initially the idea began with the interest in how people are attracted to brightness, not just literally but also in the sense of bright, happy people, fun situations and light environments. The moth was one of the creatures that came to mind that was attracted to the light and kept hovering around lit spaces.

In the search for a metaphor, I kept exploring and reading about various organisms and situations that corresponded to the phenomenon of the attraction to the ‘bright’. Another phenomenon that recollected was that of the fireflies/glow worms. Adults and children alike were awe struck by its transient beauty and would spend hours looking for these creatures wanting to capture forever the magic in their minds.

The concept of the jar came as an instant association with the fireflies. With it came the ideas of containment, capture, attraction, light, movement, fleeting moments, memories, transcience, ethereal moments and childhood memories.

The piece started building as a metaphor for the human instinct to be attracted to happy times and people. Childhood memories are of some of the happiest moments of freedom and playing in the sun and dirt for long hours along with adventures that sound like those from Huckleberry.

The initial idea was to have a magnified jar in the form of a wire-frame within which the fireflies mini-robots were suspended from the center of the jar. There would be proximity sensors along the sides of the jar and thus as and when approached by anyone, the fireflies would be activated according to how close up one comes to the jar/them.

The individual fireflies would intended to small individual units consisting of a vibration motor and an LED that were encased in a vellum shell that had a thought/memory written on it. On being activated, the unit would light up and start to vibrate and also make visible the reading on it.

Connected initially one and later another vibration motor and LED through an H-bridge to switch the direction of the motor(s). This was controlled with the help of a switch. An infra-red proximity sensor was also attached that controlled the brightness of the LED and the rpm of the motor.

Once I had done away with the idea of the big jar, it also made me realize how much I didn’t want the jar at all. The piece developed into the jar being only as a virtual presence in the form of its shadow but not really there physically. Decided to have the fireflies suspended from the ceiling and hang over the shadow of a jar. Three proximity sensors would be placed around the jar thus when approached the suspended fireflies closest to the viewer would glow and buzz. Each firefly also contained a memory written across it in the form of the wings of the bug and in the shadow of the piece, one can see the whole firefly coming to life. 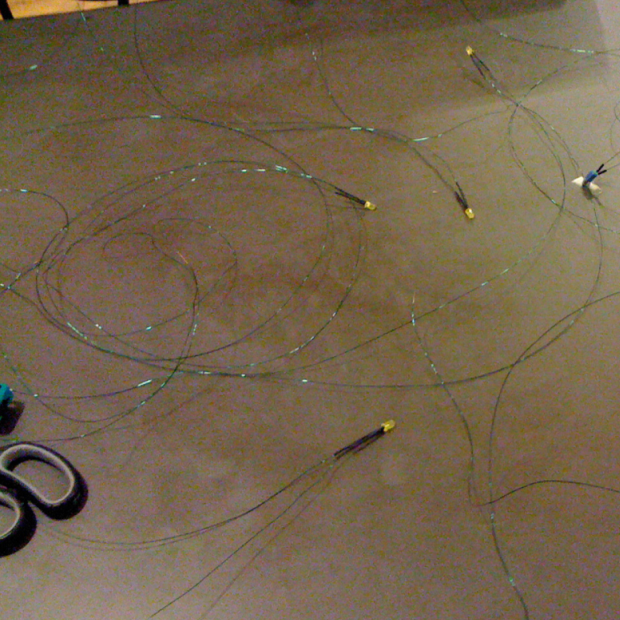 In the first iteration of the piece, I had used a 22 gauge insulated solid wire and that made the structure stiffer and heavier than I would have liked it. The wires wouldn’t really vibrate when the motor at the top vibrated and thus the installation became less fluid than I had desired.

On experimenting and looking further, I used enamel-coated magnet wire that was generally used to create coils within motors. The wire is super thin and the enamel needs to be scraped off to make contact. With the new wire I recreated the individual units with LEDs at the bottom of the wire and vibrations motors at the top such that everytime the motor got activated it made the structure vibrate and seem as if the memory is buzzing.

Finding the fire within

Previous Project Animation : The Wait
Next Project Book Design : A Curious Contrast I Chanced Upon